This is the final rebuilding of the original O gauge store layout. We rebuilt it in Marklin HO this time and changing the track plan slightly to make it an oval dogbone instead of a double reverse loop dogbone. The reversing loops are still there at the top and bottom but now the user can run two trains following each other. The scenery structure is our usual Sculptamold over Shaper Sheet base. The stone retaining walls are Chooch. In the inhabited areas, we used a lot of Vallejo ground paste for the roads and yards. 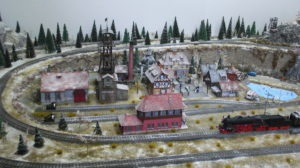 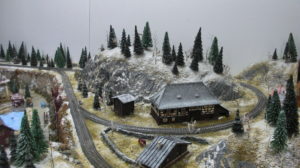 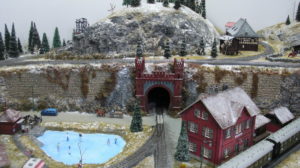 This layout is a European winter scene set sometime around 1950 based on the use of wagons and cars. The main theme is early winter or late fall activities including a street festival,  ice skating, setting out hay for the animals. Also included are a snowball fight, sledding, and animals foraging in the snow (not photoed). The street is carved plastic sheet. The stone wall is Sculptamold. The snow is Woodland Scenics Snow. Note that we applied plenty of grass, bushes, vines, and shrubs and only LIGHTLY applied the snow. The result represents about a 4 inch snowfall that melted on the roads: the colors show through to avoid the ‘too white’ effects of many snow scenes. 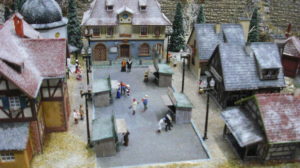 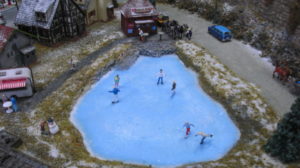 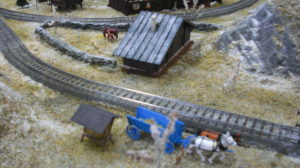 The town is a combination of commercial operations and industry. The industry in this case is represented by an old style mine. All buildings have lights and the street lights work but we turned them off to avoid glare on the photos. 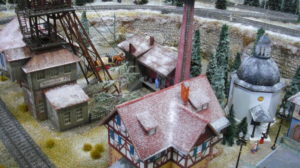 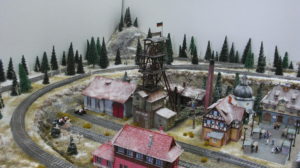 Most of the kits are Faller except for the ‘onion roof’ church and smaller town structures, which are Volmer. They were assembled by the client and weathered by Rail Tales. The weathering is our usual mix of washes, drybrushing, and the new AKI weathering pencils plus a new snow product from Deluxe. Figures are mostly Preiser with some Woodland Scenics and Noch items here and there. 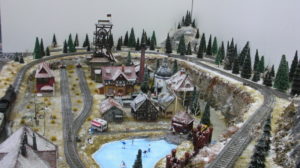 The scenery work on this project was very time consuming but we think the effort was worth it. Going purely on artistic appeal, this is our favorite layout to date.