This is a display diorama created to fit in a glass cabinet in the Crozet Library in recognition of the February book of the month, “True Grit” (yes it was a book long before it was a movie…).

The book takes place in ‘Texarkana’, the region of the great plains in western Arkansas, northern Texas, south-western Kansas, and eastern Oklahoma. The diorama therefore represents a typical western prairie town and so is quite flat but filled with vegetation.  Most people think of western desert terrain when they think ‘western’  because most western movies are filmed in that terrain but most of the ‘west’ is actually grassland and very fertile.

We used a styrofoam base and layered over Vallejo ground texture compound rather than our usual Sculptamold. The Vellejo mediums are easy to sculpt with fine texture (wheel ruts, puddles, churned up mud, etc.) and take stains very well when wet. They are also very sticky and ground foam and ballast adhere directly to them and so do the buildings. The ‘grass’ is a custom Rail Tales mix “Prairie Scrub”. It represents the scrub that grows up when the existing prairie grass is plowed under or torn off in developed areas. Real high grass prairie vegetation was 8-12 feet high. We are experimenting with ways to recreate this…

The number of  western style buildings available on the market is unfortunately somewhat limited. The background buildings are from Walthers. The foreground buildings are from Alpine. Alpine makes very affordable wood and bristol board kits but they are of the craftsman type, meaning they have very basic directions, parts that need a lot of trimming and fitting, and some experience is definitely recommended. They look good when finished though. Weathering was done with Bragdon weathering chalks.

The locomotive and cars are Blackstone narrow gauge units.  Blackstone produces rolling stock in both pristine and pre-weathered versions. They are HO scale but have a narrower track and the cars and locomotives are smaller and therefore fit the small diorama space better.

There are unfortunately very few 19th century western figures out there. The ones on the diorama are from Vollmer and Preiser.

Once the exhibit is closed, the diorama will reside at Rail Tales. 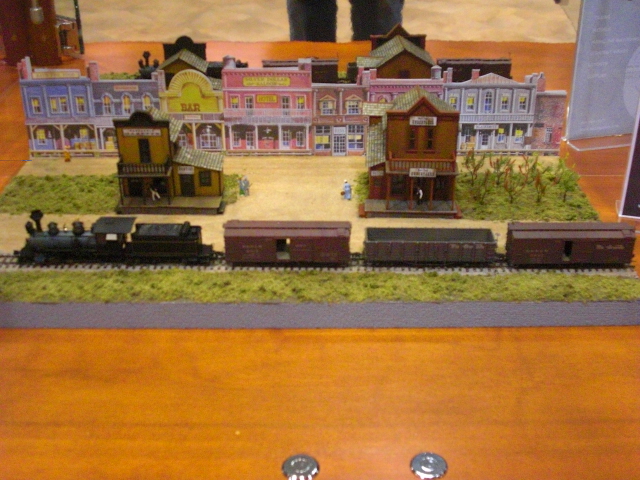 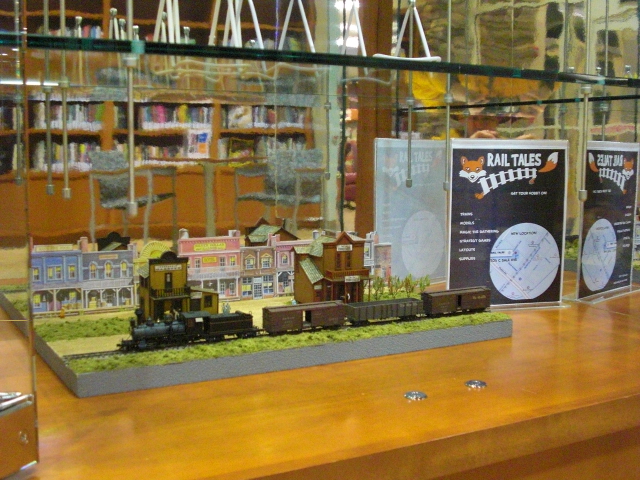 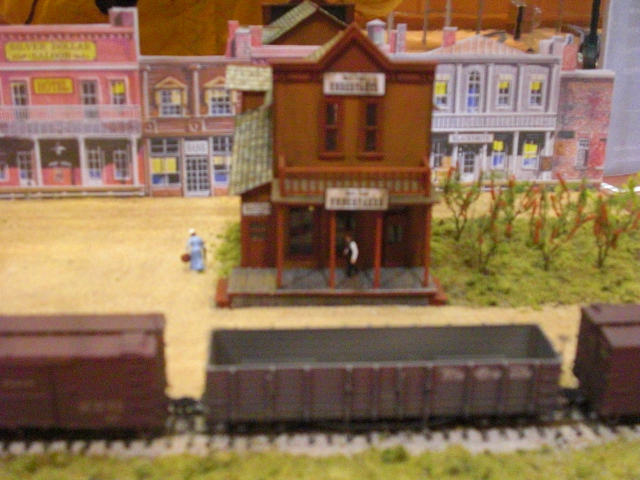