This layout has been dismantled and is being replaced. Text and pictures are of previous versions.

This layout was based on a design found in Classic Toy Trains (Sept 2012).

Update August 2015- this layout was originally built as ‘Coal & Oil’ (or Oil and Coal) and was originally on display in our old location. Then it was damaged in the move and rebuilt once but that rebuild was never finished because I decided that we needed to use it as a Ross Custom Switch display. For a local train show, we tore up the MTH track that was on it and which had given good service for a couple years and replaced it with Ross. We also added a backdrop and trees. The layout is still not finished and when it is completed, we will name it.

Rail Tales needed an O gauge display layout to show to potential clients and this designed suited our needs perfectly: it was compact, it had some nice drama and scenery elements in it, it lots of places to install working accessories, and best of all, it didn’t use that many switches and so kept the cost down.

After using it as an MTH Realtrax layout, we decided to switch to Ross Custom Switch (RCS) track for four reasons:

1) RCS is made in the United States! We now offer track in all scales that is made somewhere other than China.

2) RCS has real wood ties and steel rails with pins. Not only does it look real (because it is), the pins can be pulled and the tracks adjusted if necessary. We also can ballast the track like real track (more on this later).

3) All switch machines fail and unlike all other O gauge systems,  the Ross system does not require disturbing the track in order to replace the mechanism.

4) As a newly minted Ross dealer, we needed a showpiece. We have made the decision to use only RCS on layouts we build for customers for a variety of reasons. (Ross costs less than Fastrack by Lionel and about the same as MTH and Atlas products).

Rebuilding the layout with a new track system had a significant set of obstacles. First of all “O-31” MTH and “O-31” Ross track does not have the same curve set. We had to use some Gargraves flexible track in places (RCS was designed to work with Gargraves). Second, RCS also has no roadbed and we had built the layout structure for track that had roadbed. Because of this, we laid a heavy layer of Sculptamold down where the track was going to go to provide a firm base. Third, RCS does not make short ‘splice’ pieces, so we had to do a lot of cutting. Fortunately, a 52 tpi razor saw (made by Zona) handled the cutting job easily.

A few notes on handling Ross track (and Gargraves too): a) cut edges are sharp, so use a metal file to clean them up or you will be bleeding for your hobby, b) do not try to insert the track pins with your fingers- use flat pliers of some kind (see previous note about giving blood for the hobby), c) do not try to force the track to bend or it will ‘rack’ or otherwise deform.

Once the Scultamold was dry, we pinned the track together and then pinned it carefully in place. As the roadbed was not perfectly even, we allowed the ties to float above the surface where necessary to get the track transitions smooth. Once everything was in place, we mixed up Mold-a-Scene plaster (Woodlands Scenics) with powdered pigment and sprinkled the DRY mixture around the ties, sweeping it into position tightly around and under the track. Then we wet the mix down with ‘wet water’ (alcohol and water) using a very fine mist applied until everything was thoroughly soaked. After the surface was no longer damp, we applied our Rail Yard custom blend as ballast, soaked that down, and applied Scenic Cement with an eyedropper. The entire mix dried in about 2 days and the result was very effective concrete bonded thoroughly to the Sculptamold. We can actually slide the entire layout by pushing on a tie!

The Layout is designed to represent a backwoods short line somewhere in western Virginia, West Virginia, or Pennsylvania. It was built to run either an 0-4-0 steam switcher or 44 ton diesel. Both these items are due from MTH and ultimately we will use one of the MTH items because of the extreme slow speed capability. For our train show, however, we ran the Williams 44 tonner and it performed flawlessly all day (it just ran too fast for our liking downhill).

Eventually, the layout will be a winter snow scene. Kreela Moore painted the backdrop with this in mind.

The trees are from Grand Central Gems. They make beautiful large scale conifers. There are two wooden buildings- Dan’s Welding and the Company House, both from Laser Art and built by Gary Whistleman. They have not been weathered yet. The large stone building is from MTH with some weathering added. We will be adding more details and more weathering (including snow) at a later date.

The structures in the background are abandoned/derelict buildings from Grand Central Gems. We are not sure if we are going to keep them as an abandoned town or not.

The mountains are built using our usual Sculptamold over Shaper Sheet system. The retaining walls are by Chooch. 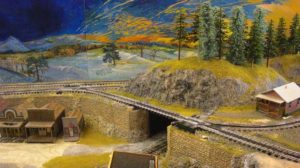 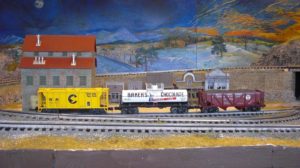 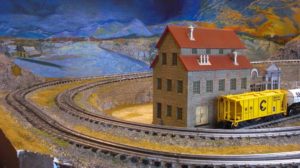 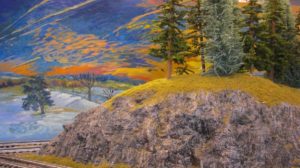 Obviously we have a long way to go but our goal is have the scenery ready for Christmas season 2015.

This layout is for sale: (includes track, buildings shown or others of comparable price, trees, and backdrop). It is wired for conventional control of the turnouts (switches) and for either DCS or conventional train operation.

$3500.00 delivered ‘as is’ (scenery not complete) and set up in the Charlottesville area (rolling stock and control system not included).

Pictures of the layout as it was originally operated inside Cville Hobbies: