Now THIS layout design was a serious technical and scenery challenge!

The client has an attic space with a sloped ceiling and an existing platform and a large supply of track in both O and S gauge. The O gauge track was Lionel Fastrack and the S track was the old “S Helper Service” roadbed track which will soon be re-issued by MTH. The client wanted something dramatic that would operate 3 trains at the same time and have lots of scenery, especially mountains and water, and visual action. Later, the client added the requirement that we accommodate his collection of ceramic buildings as well in a ‘Christmas town’ as well as leaving space for another town on the lower level. Finally, the client wanted to do a lot of the scenery himself, especially buildings and trees.

What we came up with was a doubled over reverse loop dogbone for the O gauge lower level and basically plain loops with a couple sidings on the S gauge upper level. The  reverse loops would feed a main line that would parallel itself most of the way around with both reverse loops hidden inside large mountains. The final result had a grand total of 16 tunnel portals and nine bridges, a canyon nearly 4 feet deep, and a river nearly 3 feet deep separating the layout into two ‘sides’. A lot of the track is hidden but it is all accessible by removable panels or crawl spaces.

All the systems are conventional control with a twist: one of the S gauge trains is a true rarity- an American Flyer DC powered train! So the upper deck is designed to allow either upper track to be DC powered or AC powered using a 4 pole double throw switch.

Three of the O Gauge bridges are MTH long truss bridges and one is a Lionel truss bridge. There is also a Lionel girder bridge in the canyon. The stone portion of the viaduct is all hand carved and the elevated steel bridge that crosses the lower O scale track on the curve was custom made of plastic sheet. Both S scale bridges are custom- one is carved rock over foam, the other is Chooch stone over plastic sheet (the later is removable for service).

The huge expanses of rock facing required a new technique which will now become our standard. The substructure was our usual plaster cloth over cardboard lath and newspaper but the outer surface is all Sculptamold troweled on and shaped with a wet brush. This proved MUCH stronger than plaster. We would have destroyed conventional plaster trying to access all the canyon and mountain areas.

All the portals are hand shaped by necessity- all the spaces were difficult to fit and could not easily accommodate pre-made portals.

The client installed the final surface material after a brief introduction to the technique.

The river is Vallejo Water Effects over Vallejo gloss gel medium. It was not practical to try to pour the river. The Vallejo material is harder to use but gives an excellent result in a short time with some skill and practice.

Getting Started. Note the foam structure used to support everything. 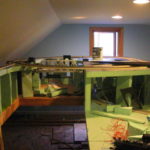 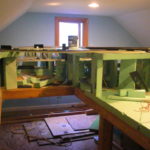 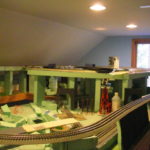 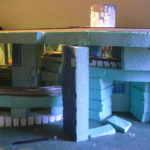 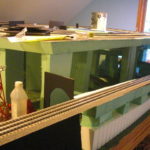 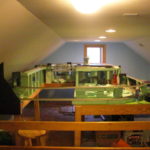 Roughly halfway done with the mountains and canyon. Upper deck S gauge not in place yet. 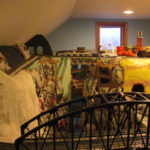 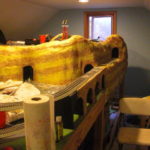 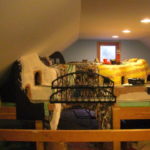 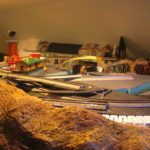 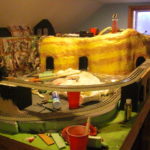