The Jefferson Railroad Club (JRC is the club, JRR is the railroad setup)

The Jefferson Railroad Club (JRC) is a model railroad club organized to develop and periodically operate the Jefferson Railroad (JRR). Organization at this time is informal (see membership requirements below) with all components of the Railroad itself being the property of individual members. Specifically, each member owns his or her modules and the common operating items such as the digital control system are the property of individual members as well.

Currently all inquiries concerning the Jefferson Railroad Club should be directed to Bret Jones, either at Rail Tales (phone 434-984-1170) or by email (bretjones@railtalesva.com).

Except as otherwise arranged, the Jefferson Railroad Club meets at Rail Tales on the last Sunday of every month at 1 pm. Operating Sessions are Quarterly, usually on the first meeting of the quarter. Specific scheduling can be found on the Rail Tales Schedule of Events calendar (www.railtalesva.com).

In keeping with Jefferson’s view of the nation during his day, the JRR operates according to a collective plan and requires that all components meet certain requirements but otherwise allows each member to introduce his or her preference in equipment and scenery. Some limitations on rolling stock size and type are necessary for practical reasons. Also, when operating in a public setting, a certain sensitivity to public taste is necessary (no controversial subject matter please). Otherwise, members are encouraged to explore individual interests. Currently, operating equipment represents time periods from the 1930s to the 1980s and includes European as well as American prototypes and module scenes.

As currently constructed, the first set of modules covers a lot of real world distance. Our staging yard is considered to be Chicago and Tim’s module pair are referred to as the “Chicago Y” or Chicago as his modules access the staging yard. Facing the module, trains head East to the right and West to the left. As most railroads access Chicago directly or indirectly, this allows for most any roadname on the locomotives. Current operators with specific railroads are Burlington, The Otter Bay and Fox Island Railroad (a freelanced joint B&O/C&O bridge line known as the ‘Fox and Otter’) , and the Pennsylvania.  We haven’t really come up with an explanation for the European portion yet.

Members may build modules in ‘sets’ or groups of modules that always work together. This is desirable for yards and other ‘operational’ components. Members may have sets of up to 2 straight modules or up to 2 straight and 1 corner module with the corner on one end of the straight(s). It is understood that during the planning for a session, a set will be incorporated and operated as a unit.

Members who wish to operate a locomotive during an operating session must bring to the session:

4) Each card must have the name and a usable description for the car and a destination (module and industry).  The destination may be pick up (origin) or delivery.

Members contributing modules to an operating session must bring the following:

1) Any module or module set(s) agreed to during the planning meeting for that session including legs or other support structure(s).

4) Six (6) line wire for connecting the control panels of adjoining modules or sets.

1) You may use NMRA modules so long as they can be successfully clamped to JRR standard modules described below. Linear Modules must be 48” long and have independent legs that allow the module to be set up with the mainline track 40” above the floor. The width may be up to 24” although the typical JRR module is 18” wide to allow for easier transport.

Corner Modules are to be built with a nominal outside dimension of 48” square , although the corners may be cut off for convenience. The dimensions of the 24” wide modules are use for track spacing.

2) The Jefferson Railroad module design has Code 100 track resting on standard cork roadbed. The benchwork is 2” thick styrene insulation foam fixed to 1 x4 dimensional lumber (3/4” x 3 ½” actual size). The dimensional lumber provides a clamping surface at either end for standard quick clamps. Any module design which matches track and benchwork height and which allows for end clamping is allowed.

5) All track and turnouts are to be laid so as to be DCC compatible or DCC friendly. All tracks are to be powered from a common DCC ‘bus line’ that has connections for adjoining modules. JRR standard wiring practice is for the track farthest from the outside edge to be wired ‘red’ and the nearest to be wired ‘black’. Modules which are wired differently should be marked at the connection points to avoid shorts.

6) Modules must have at least one (1) NCE compatible connection panel per module set, generally on the outside or operators side. The current JRR control system is an NCE Pro Cab radio system, so members may control their trains with a wireless radio device if they have one. Otherwise, they can plug into the panel nearest the train they are controlling.

7) Modules with destinations must have card pockets to hold the delivered cards for each car.

Blocks will be designed with connections that go outside the Block so as to facilitate connecting with other Blocks. The goal is for the Jefferson Railroad Club to set up once a year at a location that can accommodate multiple Blocks.

The current configuration allows for 4 members to have 3 module sets or for more members to contribute smaller sets.

During an operating design session, the club will determine the configuration of modules to be brought by members to fit the space. The club should also plan jobs and contributions of rolling stock from each member to allow all members to operate in the given space.

Ideally, each Block would have at least 2 and preferably 3-4 yard areas. Each yard would have a switcher position to work the yard. At least 2 and possibly as many as 4 other operators will be able to work the mainline. With a larger number of operators on the main line, a dispatcher may be necessary. Also, as most turnouts will be manual, operators can take turns assisting with turnouts and coupling/uncoupling of cars. Each block can therefore accommodate 1 operator per yard, 2-4 mainline operators, a dispatcher, and several assistants handling the rolling stock.

For simplicity, all cars and trains begin and end each session in Chicago. Cars are randomly assigned to each locomotive (operator) and delivered to the destination on the card for each piece of rolling stock. Destinations within yards are dropped at the yard entrance and delivered to the final destination by a yard engine. Destinations at simple sidings are set out by the road engine. Once a train has delivered all its cars and cards, the operator draws five cards from delivered pockets and has to collect those pieces of rolling stock and take them to Chicago. Cars in yards are assembled by the yard engine. Those at simple sidings are picked up by the road engine. Once all cars are back in Chicago, the session ends.

Our Third Operational Meet: We have a complete Railroad!

For this meeting, we have enough corner modules and sections to create a complete oval layout. This was our first setup with everyone present and there were some electrical glitches but we eventually got everything running and had a great time.

At this meeting, we had 5 members in attendance, 4 of whom had modules that we used in the configuration, and 2 guests, both of whom we hope to add to the roster soon.

Our standard configuration used 3 corner modules belonging to Bret Jones which are built and operational but without scenery, 1 corner module belonging to Bob Minnis which has full scenery, although he did not set up his buildings for this session due to time constraints, and 8 straight modules. For this meeting, Bob had two, Bret had two, Art had two, and Tim had two.

Art’s modules constitute a home switching layout engineered and laid by Rail Tales but Art has lots of buildings of his own. For time reasons, he did not install them this time. Art does European railroading and his layout is really 1944 Germany which does not remotely fit the rest of the setup but his layout is fun to switch so we overlook the location. 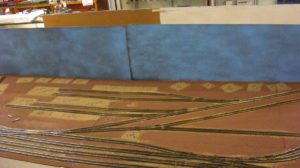 The club uses an NCE radio system and hopefully more members will buy the Cab6 radios so we can do more walk around. Setting up the plug sets took some time.

Our next operational session will be at the end of January, 2016. Our intention is to hold monthly meetings after that to assist new members in building modules and in fixing up or modifying the operational parts of existing modules.

Now that we have worked the bugs out and assembled enough modules, we will be holding operational meetings every 2-3 months instead of once a year!

Currently, club items belong to Bret Jones while members have individual modules. The club operates using an NCC radio system, although we only had one radio cab for the meet and had to also use some plug in cabs. Next time we will have at least one more radio cab.

Set-up went relatively smoothly, especially considering this was our first time but I cheated and my four modules up the night before and tested the radio system in advance.

We borrowed some of the dioramas from Kraff T Fox models for delivery points until we have the structures built.

Due to some ancient wiring, we were not able to access the back of Bob’s scenic modules and had to switch primarily on the bare foam but his mainline worked fine after cleaning.

I discovered that one of the Otter Bay modules needs another crossover and will be adding that for the next session.

Hopefully we will have a chance to build the remaining corner module and hopefully we will have Art’s modules to complete the setup so we can run loops as well as point to point. He has an elaborate switchyard, so we should have three yards to work plus some other sidings.

We all had a good time and learned a lot. 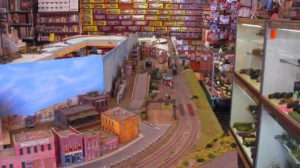 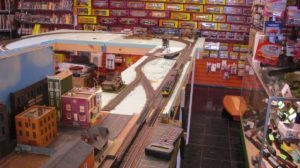 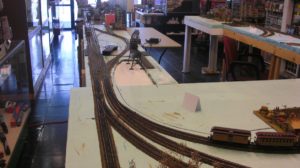 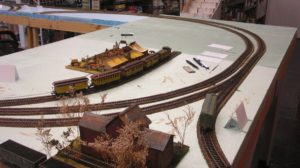 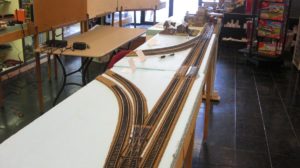 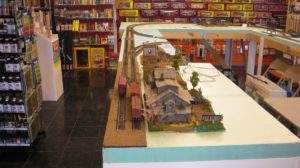 Next month we will work on building the corner module I hope.

We used MRC Prodigy and an old Bachmann DCC locomotive for initial testing but we’ll be using NCE or Digitrax for regular meets.

The tracks needed some cleaning but otherwise everything worked okay. 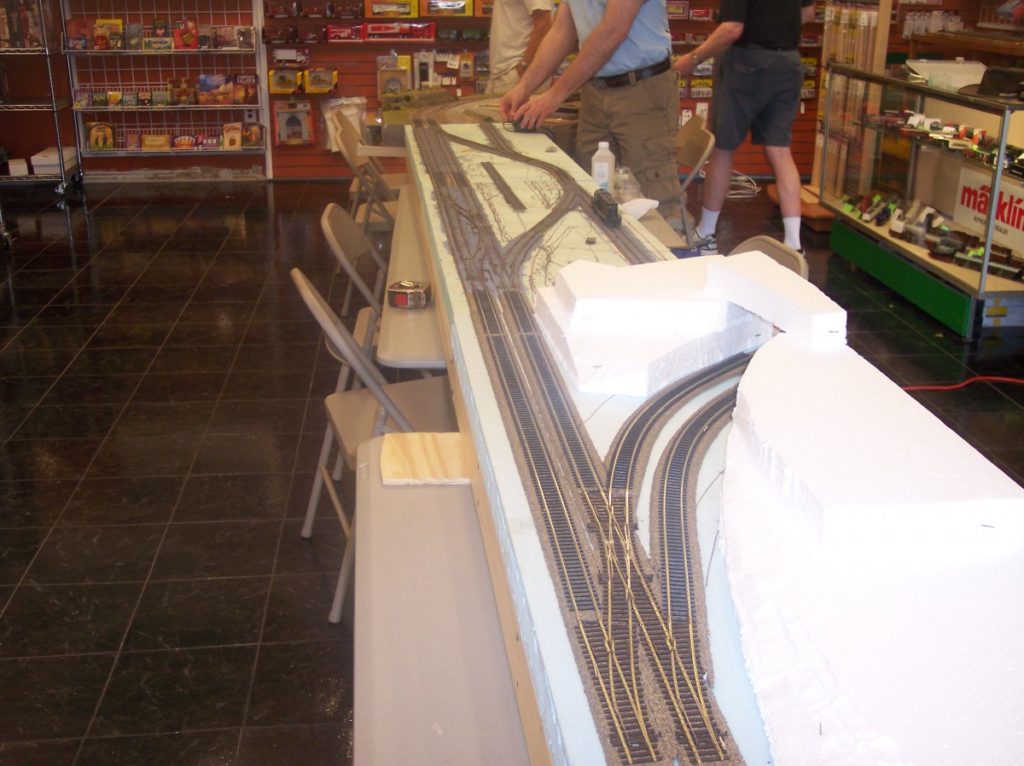