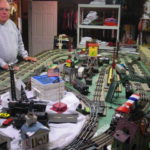 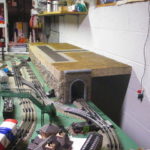 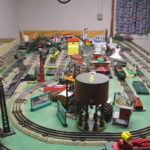 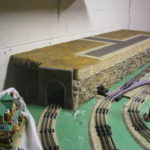 The client had an existing O gauge train table and control systems (conventional and Legacy) and hired Rail Tales to re-configure and re-lay the track into a more interesting configuration that would allow for multiple train operation and access to more operating accessories. Although it does not have an official name, the client is a Virginia Tech alum and fan, so we refer to it as the Hokie Line.

The table measures 6 x 12 to which we added an upper ‘village deck’ to accommodate the client’s extensive collection of O scale ceramic village pieces. Snow was later added to this upper deck but is not shown in the photos. Note that the deck is constructed of rigid foam covered with Sculptamold, road cobblestone material, and styrene sidewalks. It is removable and sits on a support frame. the sides are faced with Chooch flexible wall material and the front cliff is more Sculptamold.

The basic plan consists of a trolley track, two separate loops which intersect though a complex crossover, and a partial third loop that also allows is a reverse loop. Two trains can be operated continuously while a third waits in the reverse loop or transition loop. Trains can switch from inner to outer loop through a complex series of maneuvers. A number of operating pieces also line the tracks.

The layout space also includes a ‘bump trolley’ on a separate track.

The new configuration made use of most of the client’s existing standard O gauge track, adding wider radius curve pieces for smoother operations on the outer tracks plus O-72 switches for changing loops.

This is a good example of a highly entertaining compact toy train layout constructed mostly from a (well maintained) old collection of items with select new product. The client intends to add more scenery later.