11/15/2015- the Alsace and Lorraine Layout has been completed! Well, our part anyway. The clients still have to add all the people and automobiles and other little details. They are also installing a custom backdrop.

This layout will measure 4′ x 14′ when completed but is being built in sections at the store to be transported and installed at the client’s residence when ready. Final joint details will be completed at that time so as to make the layout a single piece.

Originally, this layout was supposed to represent a rail line running through the Alps from France on the left (west) to Germany on the right (east) and originally was going to have rivers at both ends and a steep mountain resort area in the middle with snow. After the track was laid and we began roughing in the scenery, we realized that we could do this but there would be no room left for structures except at the very front and nothing for the trains to do but run around. The clients had purchased many structures they wanted to use, so we revised the plan. The clients also wanted to have a canal rather than a river and were inclined to have the entire layout in France.

After doing some research, the layout was ‘moved’ to run from the area around Nancy in Lorraine to the area around Strasbourg in Alsace (west bank of the Rhine on the border with Germany). The lower mountains fit very well, the buildings they had selected were appropriate for the region, and best of all, the area has many famous canals. Perfect.

The middle section is a modification of our in-store Octoberfest, compressing the design front to back to allow a through track connection in front and a hidden through track and storage track in the rear. The layout will be installed on a moveable table so as to allow access to the hidden sections if necessary but the hidden tracks will have block detectors. We added working spur tracks on the ‘top’ to give the climbing branch line something to do. 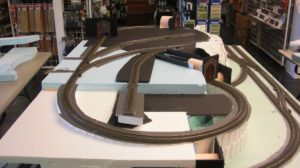 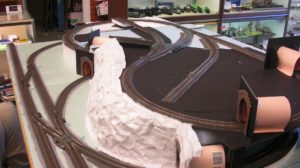 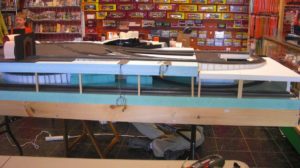 The left side has a small independent circle that exchanges with the main line oval and a small spur that ultimately will represent a tie to the outside world. This section design features a castle on the mountain with an old twisting approach road, a cascading stream with waterfalls, a mill, a small town in front of the mill, a small station, railroad crossing with working signals, post office, and a vineyard on the hillside. 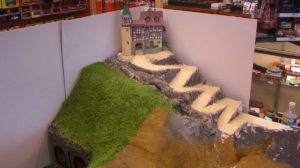 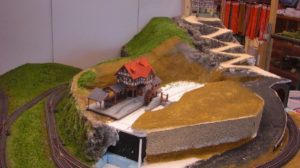 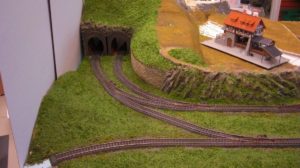 The right side will feature a town built in Strasbourg style exposed timber framing, a mountain highway, enough switching tracks to do some switch operations, and a canal with a lock. We modified a canal boat to fit the available space.

The track has been painted with a four step process we use with all track with built-in roadbed: We apply a stain (in this case Hunterline Creosote), then hand paint the rails and tie plates with a dark rust color, then drybrush the entire roadbed and tie base with an off white. (the actual colors are from Polyscale and no longer available but any dark rust and off white will do). Once the paint is dry, we clean the track and apply a final layer of Creosote to the center of the ties and make any touch ups.

The rockwork is our usual Scultamold over Shaper Sheet. The ground material is our custom Green Field mix with our custom Rail Yard Mix along the tracks.

The entire layout will be controlled with a Marklin Central Station, so all switches will be digitally controlled using M83 decoders. There will be signals placed to indicate which routes are live- this is NOT prototypical at all but most of the lights placed prototypically would be faced away from the viewer (pointless) and would be confusing, given the tight space. The lights are meant as entertainment and as an indicator to help with operations.

The town street is hand carved Smooth-It to represent smooth laid stone. We have not found a product we like that looks as good as the hand carved material.

Update- Chooch Industries came out with their new and really nice looking peel and stick cobblestone material about 4 weeks after we finished our work.

This is the Right or East or Alsace module. The buildings are similar to Strasburg. From a railroad perspective, the section is primarily a working rail yard with a large overhead crane just visible to the right. From a scenery perspective, the road, public plaza, and especially the canal with its boat and walking paths dominate. 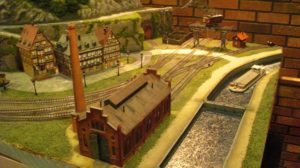 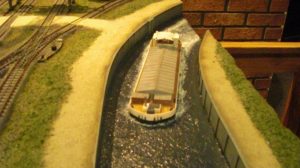 We scratch built the canal entirely out of styrene sheets, then inserted the completed unit into the base, then added the locks and details and painted it. First we airbrushed the base colors (grey and blue grey) as a primer. The water was then painted using Vallejo air colors, poured out and blended with a large soft brush in a scrubbing motion. The paint self-levels and leaves no brush strokes! We then stippled Vallejo Water Effects paste onto the surface and after that had dried, added a mix of Water Effects and white paint  to the wake area.

This represents a concrete canal for fairly heavy traffic. We are building boats for the near (lock) section. As depicted, the lock has just been filled and the near gates are ready to be opened. Once the boats are out, the gates will be closed, the valves opened to drain the lock, and the far gates opened to admit the barge.

Note that the streetlights all work and the buildings have interior lights but they are turned off to avoid glare.

This is the other end of the layout, the Alsace region near Nancy. The mill is still timber frame but the rest of the buildings are much more French in color and design. The pond was made by pouring Hydrocal plaster into the basin to fill behind the mill race gates (the model needs a good 1/3 inch fill to accomplish this so ‘water’ can flow over the race gates). Once that had dried, it was colored with water based paints (Woodland Scenics) and then overpainted with Vallejo acrylics. The later material seals the plaster because it has a resin in it. The paints also blend easily and leave no brush strokes. Once dry, Vallejo Still Water is poured over in a thin film to create the shine and depth. We used to use Woodland Scenics Realistic Water but had encountered problems with it bubbling.

The little wood bridge is scratch built. The vineyard is JTT vines plus posts we made ourselves. 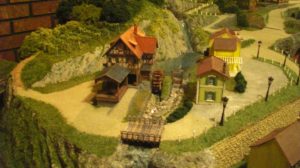 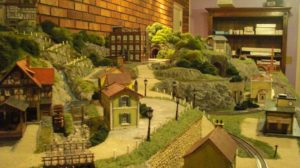 This is the ‘castle’  or villa with the scenery finished around it. The white posts that mark the edge of the road are basic styrene pieces that are molded in white. No painting. The road is painted Mold-a-Scene plaster by Woodland Scenics. 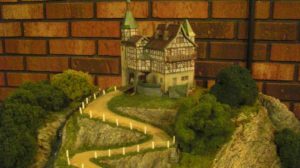 This is the other mountain top or ridge with the rustic alpine cabin and flowering meadow. 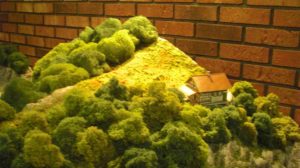 Part of the Industrial mountain area in the middle. The working flashers are from Faller. The crossings are thin painted styrene. The road is Woodland Scenics Smooth-It. We paint it with their asphalt color first, then use Vallejo Acrylic air color again, scrubbed with a large brush. It seals the surface and self-levels. The lines are a wonderful peel and stick  product made by Highways and Byways. One of the those products that end up being even better than advertised… 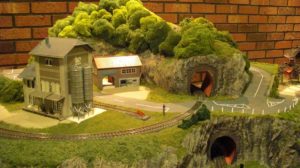 This is another part of the industrial area showing another waterfall. This gravel road was made using the new Woodland Scenics road material (buff in this case). The bumper is a Peco ‘haynes’ bumper. We like the color and dainty look and they fit any company’s track. 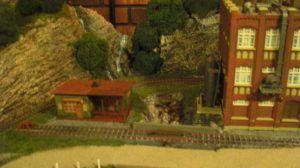 The Alsace and Lorraine had many challenging scenery and electrical aspects to it but the end results were excellent. The clients were happy and we were very proud of the finished product.